“He made imaginative leaps and discerned great principles through thought experiments rather than by methodical inductions based on experimental data. The theories that resulted were at times astonishing, mysterious, and counterintuitive, yet they contained notions that could capture the popular imagination: the relativity of space and time, E=mc2, the bending of light beams, and the warping of space. [2007, W. Isaacson, p. 6]”

“Over the years, he would picture in his mind such things as lightning strikes and moving trains accelerating elevators and falling painters, two-dimensional blind beetles crawling on curved branches, as well as a variety of contraptions designed to pinpoint, at least in theory, the location and velocity of speeding electrons. [2007, W. Isaacson, p. 27]”

Thought experiments need to be rhetorical in a good way.  A good thought experiment should be artful, eloquent, effective and persuasive in conveying the ideas, but not too pretentious or bombastic There is a downside to rhetoric in that the innovator, the scientist or the storyteller may be too good in developing  a colorful and vivid description at the expense of gathering facts and testing the veracity of the theory.  Sometimes thought experiments can actually confuse more than illuminate. The thought experiment may not work because of differences in the eyes of the beholder, because it needs more refinement or because it is invalid. Here are some guidelines for developing your own though experiment in order to tell a clear and cogent story.

Figures 1 and 2 illustrates the migration of a thought experiment involving tracking individuals, pets and expensive assets. The initial drawing and narrative was started on Sunday evening and 3.2 was completed by 7am on Tuesday. Feedback from several individuals helped to refine the drawing.  Most of the time was spent futzing around with the interfaces of the two apps and locating symbols and graphics. The idea was derived from several student projects and from watching my son crack our Wi-Fi password in less than an hour using Backtrack. I think similar cracking code could be implemented in a very small unobtrusive device.  CPU, memory, Wi-Fi, cellular and GPS chipsets are shrinking in size and price. This technology has undoubtedly been developed in some form. But, there is always room for improvement and a thought experiment can be used to drive that process.

Here are some additional references on thought experiments: 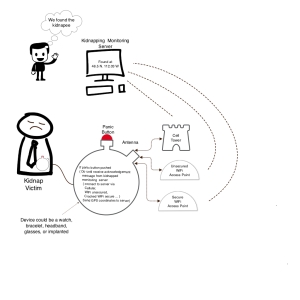